Lots of colour at the moment in the garden. Here’s just a selection from the middle of July 2018. 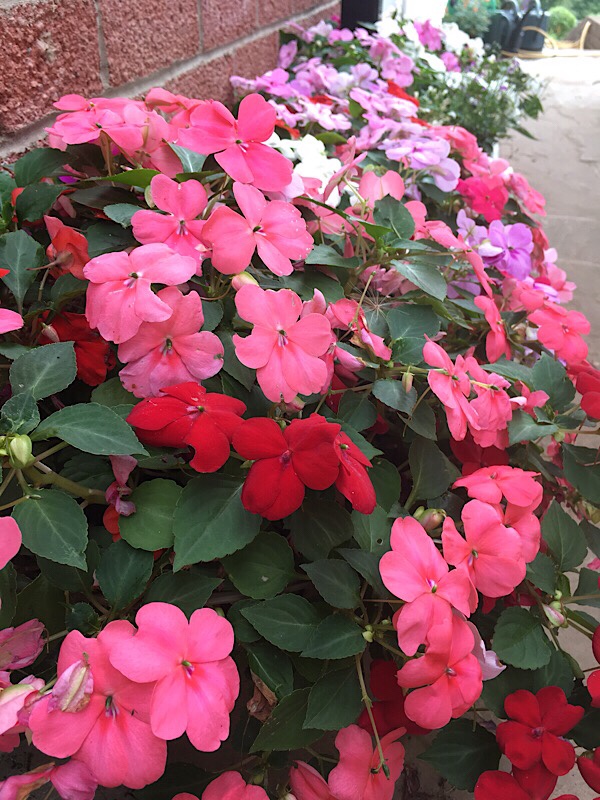 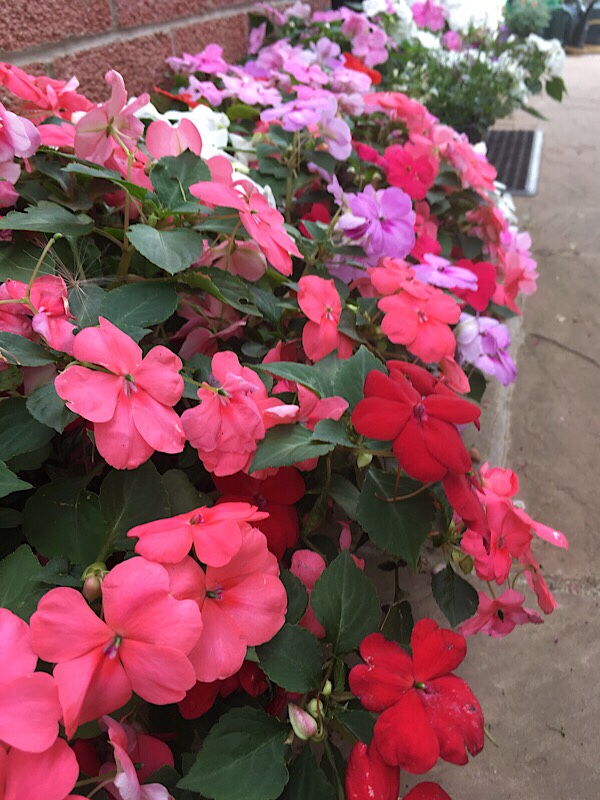 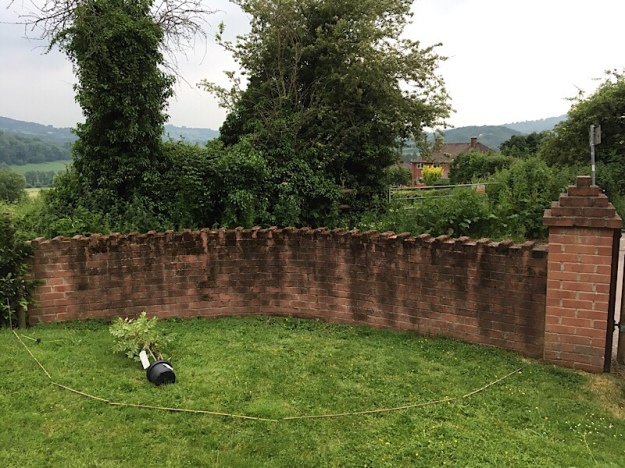 End of May 2018 – Plot marked out roughly with canes for a new planting area.

This area is situated in the front garden, by a small wall, adjacent to the front gate.  It looked ideal for a new flower bed.

This was the beginning of June after planting up.  Plants include Geum, Heuchera, Astilbe, Salvia, Spirera, Coreopsis, Penstemon

Iris now coming up against the wall.

This plant comes from the daisy family and has beautiful silver-green leaves and yellow flowers in summer. 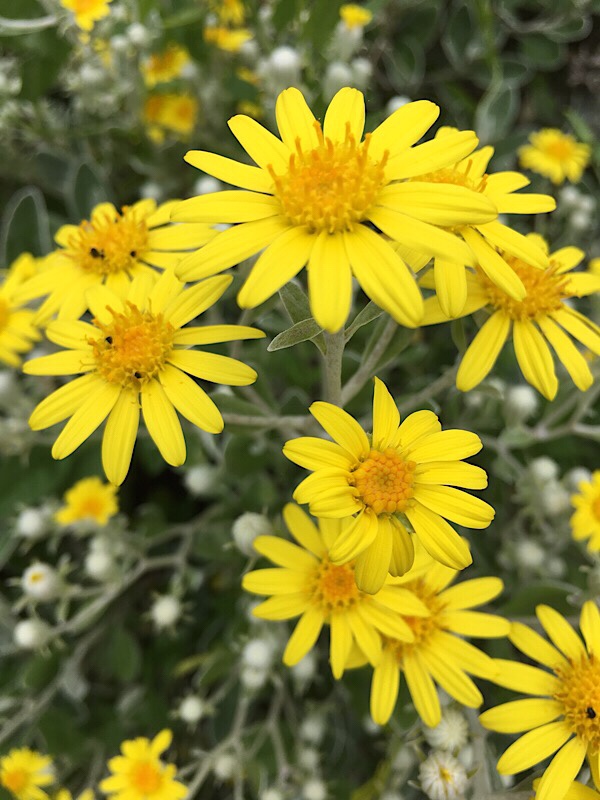 This small shrub can grow up to 3-5 feet tall, it prefers full sun and moist but well-drained soil.

It reminds me of the house where we lived as children where it grew well in our garden in Harborne.

At Springdale it grows in a lovely sunny spot, well drained and beside the drive.

The Iris this year have loved the lack of water. They have tolerated the dry conditions very well despite the ground being rock hard and the flowers are beautiful. 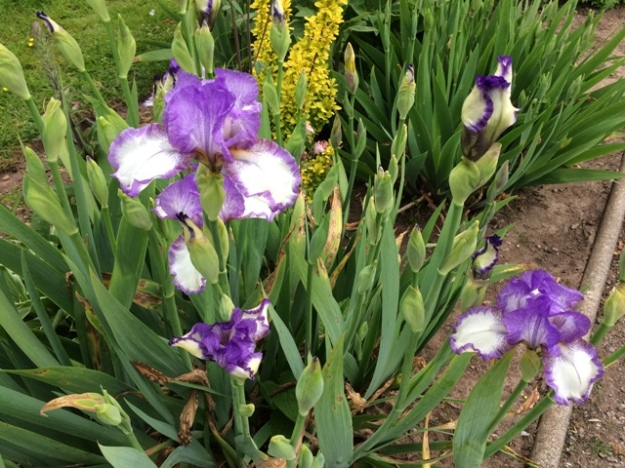 Before And After Pictures Of Springdale 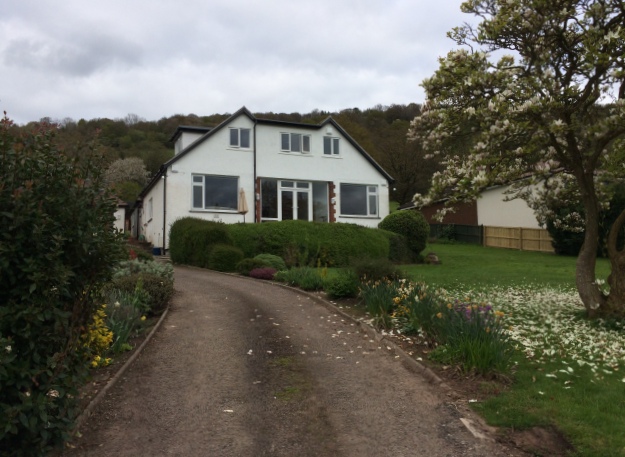 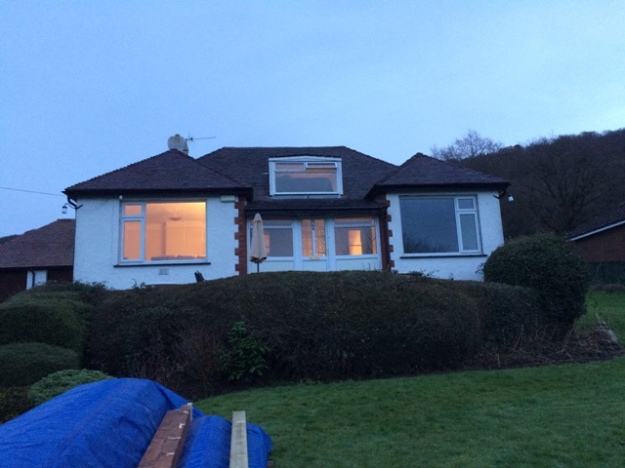 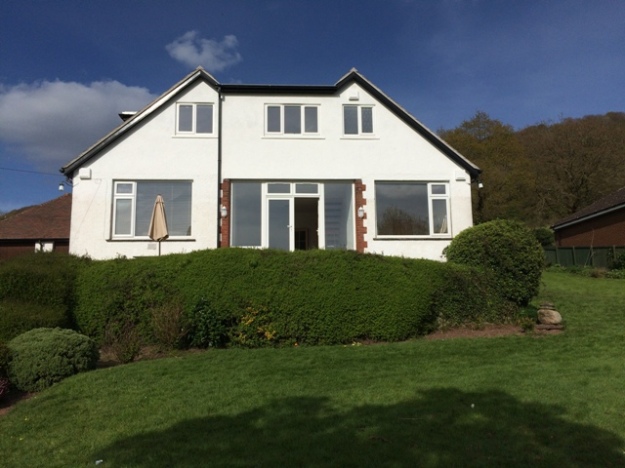 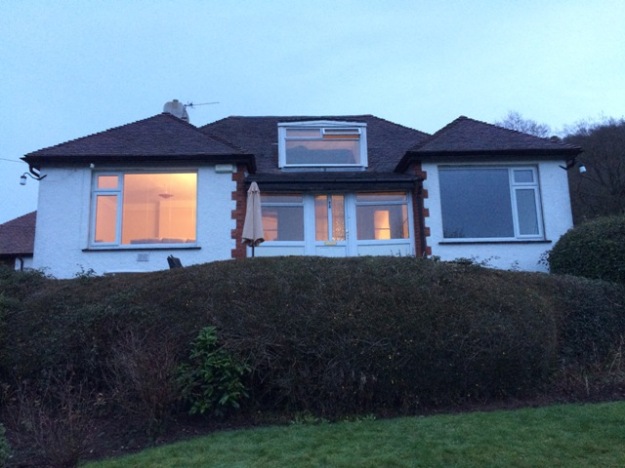 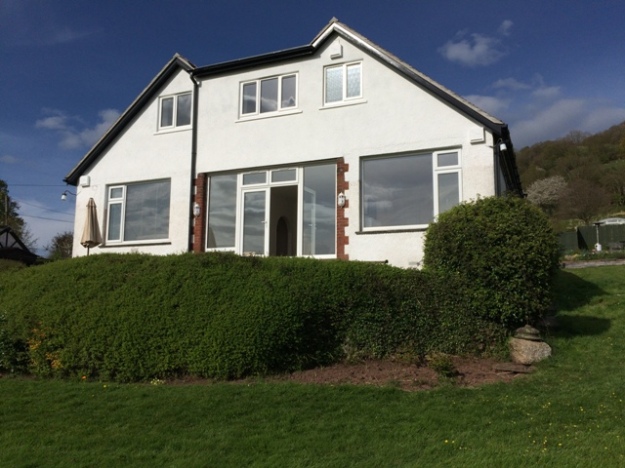 Springdale from the road

Springdale from the road picture 2

The transformation is absolutely spectacular – we are so pleased with it.

The Magnolia in the front garden has been beautiful this year. 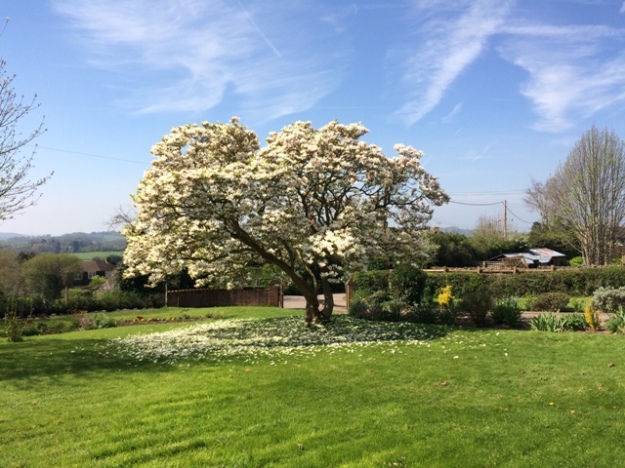 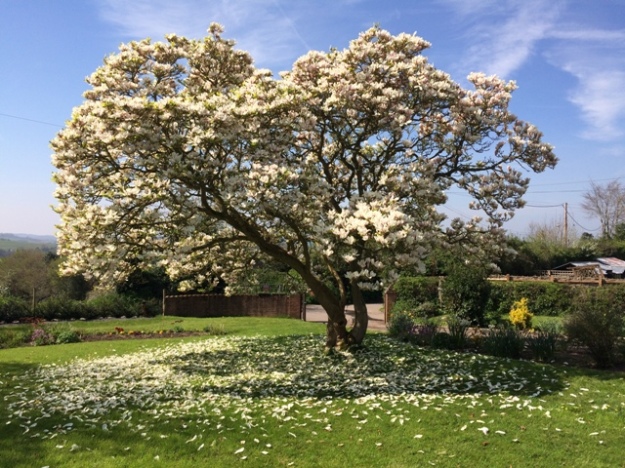 The front hedge bordering onto Wyesham Road was a bit of a disaster! The little wall that has been built and front gate is a nice feature. However this continued into a very straggly and overgrown hedge, with many random plants, including ivy, holly, and many others all held together with a mass of brambles. Although the brambles were excellent for blackberries, of which we picked many, we decided it didn’t add to the appearance of Springdale and the garden, and we wanted the front to look good and look cared for!
With that in mind we looked into various possibilities: cutting the hedge well back and leaving it, cutting the hedge down and extending the wall, cutting the hedge down and putting up fencing, or cutting the hedge down and digging up as many roots as possible and replanting a new hedge.

Unexpectedly a birthday treat for my mother provided us with a great solution. My sister booked up for us to go to see Prince Charles’ garden, Highgrove. This was where we picked up many garden ideas, one of which was Yew hedges.

So out came the front hedge. It took many hours of hard digging to remove very well established roots.

The ground was thoroughly dug over a few times to remove as many roots as possible. In the coming year it will have to be carefully kept in check during the growing season, removing any regeneration of the old hedging plants.

Posts in wired up for hedge to be planted, February 2015

Bare root Yew trees were purchased, enough for 3 plants per metre. (Taxus Baccata Hedging) Plants were 30 – 40 cm tall, but some of the specimens supplied were larger.  The ground was prepared as follows:  a trench was dug directly behind the newly wired fence; compost was added, and mixed in well with a sprinkle of bone meal.  Yew trees, however, will not tolerate waterlogged ground.

Then trees were laid in place and as each tree was planted the roots were spread out so they were adjacent to the fence.  Each tree was firmed in place using a booted foot, coming out from the tree like the rays of the sun.  Each tree was then well watered. 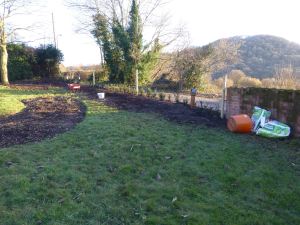 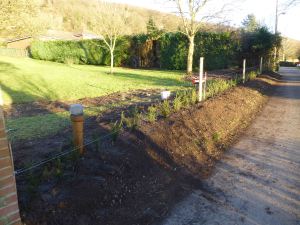 View of Yew Hedge from the road

After research, we discovered that Yew hedges are very versatile and there are many benefits of using these plants.  Yew hedge plants will eventually create a dense hedge and grow 20-40cm a year.
They are evergreen, provide a good screening and help reduce noise; they are low maintenance and can tolerate quite hard pruning, and can be shaped, even with little window holes, as at Highgrove; they are good for wildlife, both food and shelter; and they live for many years and will outlast other conifer hedge varieties. Also planting a Yew hedge is far more economical as they cost far less than building a wall.

Hedge from the roadside

My brother-in-law and sister have had great success with the Yew hedge having used them in previous gardens on a number of occasions and these hedges are still growing well today.

Yew hedge from inside garden

A portion of front Yew hedge

Finally to give the hedge a good start an extra fence was put in place on the roadside to give the hedge extra protection. This is just a temporary measure and will be removed when the Yew hedge starts to thicken up and becomes well established.

Yew Hedge fenced up to wall 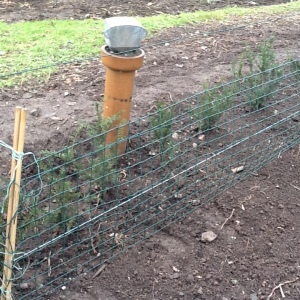 Bareroot plants are usually available between November and March but rootballs are available all year and can be planted anytime.

Interestingly scientists have also discovered that Yew contains a chemical called Taxol that can be used in the treatment of cancer.  Trimmings of fresh growth of yew can be collected for extraction of the chemical as we discovered from Highgrove.